Logan & Brad – The Taste of Forbidden Fruit – A Taboo Fantasy

BRAD HAS OBTAINED THE WORLD’S MOST POWERFUL APHRODISIAC…. A POISON APPLE!!!….THE “FORBIDDEN FRUIT”. BUT WHEN HIS BABY SISTER ACCIDENTALLY BITES THE APPLE…. WATCH OUT!!! LOGAN ATTACKS AND RAIPS HER BIG BROTHER!!! Brad has obtained a very powerful aphrodisiac!! The World’s MOST powerful aphrodisiac……a Poison Apple!!! The “Forbidden Fruit” as it is referred to. He has his sights set on a hot girl at school, and he is anxiously polishing the Poison Apple in preparation for school the next day. When he turns his back for a moment…his Baby Sister Logan arrives in the Kitchen and takes a bite of the Apple!!! When Brad screams at her to stop….bratty little Sister Logan defiantly takes additional bites of the Poison Apple to show her Brother that he is not the boss of her!!! Poor Logan soon realizes the massive error of her ways….as the effects of the Poison Apple start to kick in!! Logan feels very “weird”….and then she attacks Brad…pulling his pants off and chanting “cock….I need cock….I must have cock right now….”. Brad can’t stop his possessed Baby Sister and she sucks his cock ravenously. Logan then rides him as she continues to chant about needing cock badly until he erupts and fills his Baby Sister’s Cunt with semen. Brad confesses to her that the Apple she ate from was actually a Poison Apple….a “Forbidden Fruit”….and a furious Logan throws the rest of the powerful Apple in the garbage…..before Mom eats it 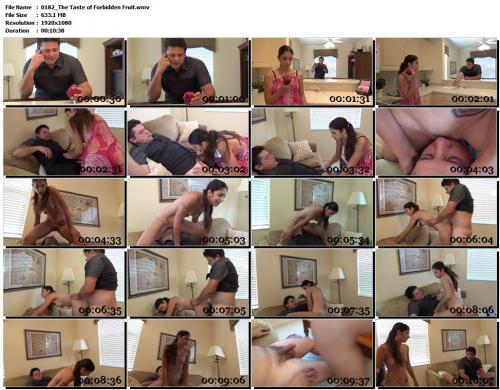