Jenni & Russ – Double or Nothing – A Taboo Fantasy TINY LITTLE BABY SISTER JENNI TAKES ADVANTAGE OF HER BIG BROTHER! JENNI MAKES A SERIES OF BETS..THAT SHE KEEPS WINNING!! WHEN THEY GO “DOUBLE OR NOTHING”…. JENNI GETS TO SIT ON HER BROTHER’S FACE, THEN BABY SISTER MAKES BIG BROTHER FUCK HER AND GIVE HIS CUM TO HER!! Baby Sister Jenni, and her big Brother, Russ are fighting over the TV remote. Russ tells Jenni that she really shouldn’t be watching TV anyway….since all her chores are still not done….and Mom & Dad will be angry if they are not done when they get home. Jenni has an idea. She decides to make a bet with Russ. Since he has chores to do too….she offers a deal. They play a game of War. If he wins….she will do one of his chores for him. If she wins…he has to do one of her chores. They begin to play, and with Jenni doing the dealing….she wins several hands in a row!! Russ now has to do all his chores…plus several of hers too!! After several losses….Russ wants to quit, and count his losses…but Jenni wants to keep going. Russ tells her, he will play one more hand…but only if it is…”Double Or Nothing”!! They decide that if Russ wins…his debt is clear…he doesn’t have to do all Jenni’s chores….but if Jenni wins….not only does he have to do her chores….she gets to sit on his face to gloat!!! Jenni wins again!! She screams out in celebration…and then hikes up her skirt to rub it in by face-sitting her older Brother. Jenni makes him lick her cunt and her ass….before deciding that she is so horny now….that she wants cock!!! Jenni makes Russ shove his hard cock into her tiny little cunt….and she makes him fuck her until she is satisfied!! Little Sister decides she wants a face full of cum…so she jerks a huge load out of her big Brother…all over her face!!! She is ready for a shower….he better get to work on all the chores….his chores AND her chores 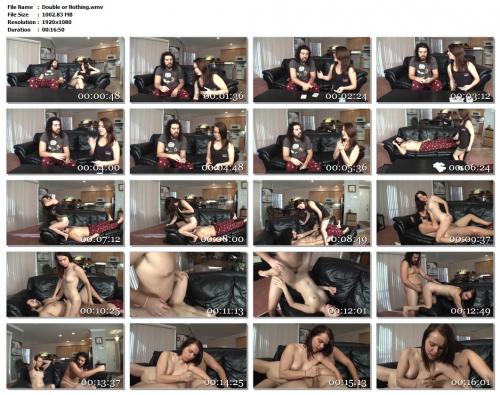