IT’S RUSSELL’S BIRTHDAY…AND HIS BABY SISTER COURTNEY CAN’T AFFORD A GIFT…. SO SHE OFFERS TO GIVE HIM A “UNIQUE” BIRTHDAY PRESENT…… SHE GIVES HER 18 YEAR OLD NAKED BODY TO HER BIG BROTHER TO USE ANY WAY HE WANTS AS A BIRTHDAY PRESENT!! It’s Russell’s Birthday, and after his Party is over, he is in his bedroom, calling his Grandma & his Aunt, to thank them for the presents they sent to him. His baby Sister Courtney comes to his room to apologize for the fact that she was not able to give him a gift for his Birthday. Courtney explains that with losing her part time job….and Grade 12 taking up all her time….she was simply not in a position to afford a Gift. Russell is very understanding….and tells his little Sister not to worry about it. Courtney, however feels bad about not being able to give her big Brother a Gift on his Birthday…so she wants to give him a “unique” Birthday Present!!! Baby Sister Courtney drops her bathrobe….to reveal her naked body….and tells her Brother that she wants to give “Herself” to him as a Gift. Russell is completely stunned….but Courtney insists that he cash in on the offer!!! Russell slowly approaches his naked baby Sister…..and politely asks if he can lick her young pussy “It’s your Birthday Present…you can do whatever you want” Courtney says. Russell gives his Sister a really good pussy licking….causing his 18 Year Old Sister to moan in pleasure. Courtney asks what else he would like for his Birthday Present….and when Russell asks if she would be willing to suck his cock….again Courtney says “Of course….anything you want….it’s your Birthday”. After Courtney sucks her Brother’s cock…Russell mounts his baby Sister and gives her a very hard Fucking….until he shoots an enormous load all over her. Russell tells Courtney that her Birthday Present was the best Present of all 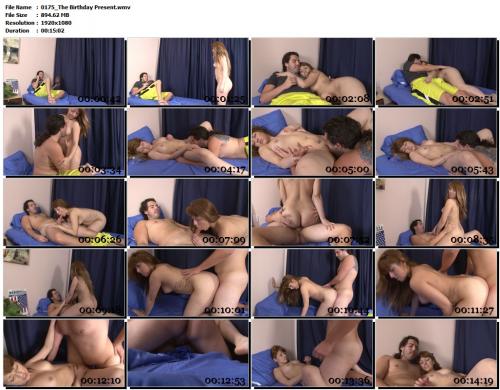